Dysplasia: the competent treatment of precancerous lesions or initial stages of cancer 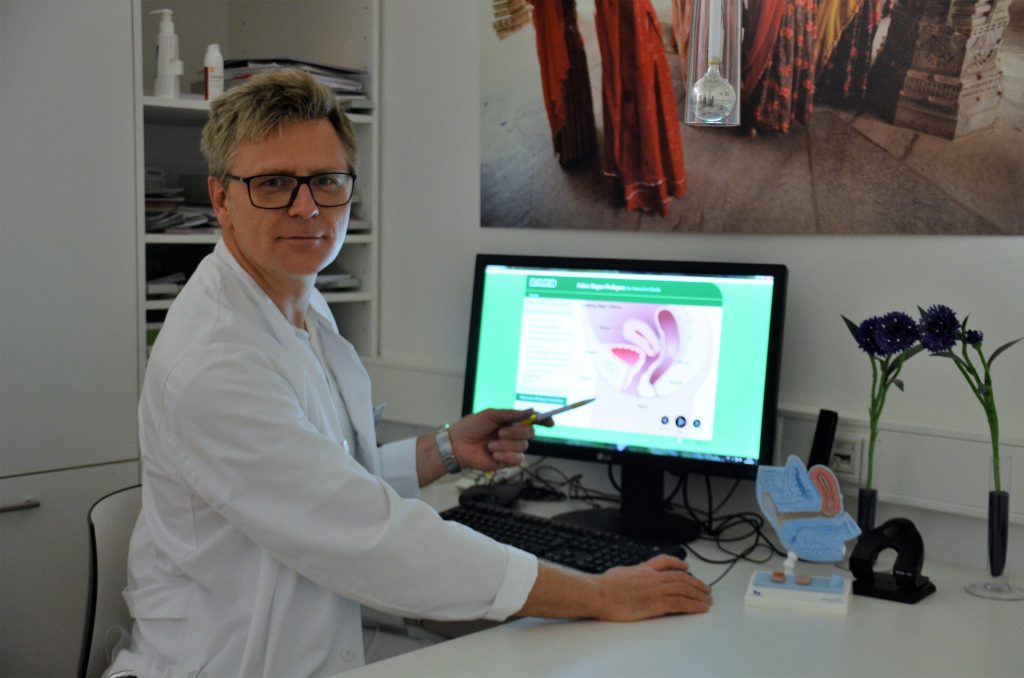 Sebastian Hentsch, MD, has been managing the Clinic of Gynecology, Mammology and Senology since 2013

Not all cell changes that occur in the cervix and vagina are malignant. Sometimes it is a question of dysplasia, cellular changes in the mucous membrane of the external orifice of uterus. Such precancerous changes are limited to the surface layer of the tissue; they have not yet penetrated into the more deeply located connective tissue, and at the time of diagnostics are not dangerous. Whether cancer can develop from such precancerous stage, how and where it is better to treat such changes, says Dr. Sebastian Hentsch, chief doctor of the Clinic of Gynecology, Mammology and Senology at the City Clinic of Solingen.

How to recognize signs of dysplasia?

As a rule, dysplasia is found in the preventive gynecological examination. During the examination, a smear from the cervix (a so-called Papanicolaou smear, a cytological smear) is taken, which shows the presence of cellular changes. The results of the examination of the cytological smear are divided into classes. The result of the first or second class is normal and requires only a further regular participation in the prevention program. To all women, the result of the cytological examination of which was shown by one of the other classes, for example, class 3, 3D, 4a, 4b or 5, it is necessary to undergo a competent examination within the framework of the so-called doctor’s reception for dysplasia. As a rule, this includes additional examinations. In most cases, a biopsy is performed and samples taken from the cervix are examined for dysplasia, and a test for HPV is also performed.

What are the degrees of dysplasia?

Depending on the degree of severity of dysplasia is divided into mild, moderate and severe dysplasia. Biopsy samples taken as part of the dysplasia treatment are sent to the pathologist for examination under a microscope (histological examination). The result of this histological examination is classified according to the CIN classification (from CIN I to CIN III). The abbreviation CIN stands for cervical intraepithelial neoplasia. In the area of the pudendal lips, the designation sounds like VIN (vulval intraepithelial neoplasia).

How is dysplasia treated and when is the need for treatment?

Detection of precancerous changes and their careful monitoring and treatment are very important, as this can prevent the development of cancer in the future. Light dysplasia (CIN I) and mild dysplasia (CIN II) are often cured without treatment. Changes corresponding to CIN I in 50-70% of cases regress spontaneously.

We recommend performing a cytological examination (Pap test or Papanicolaou test), as well as colposcopic control examinations (colposcopy) with changes of mild and moderate severity every 3 months, as this will help to avoid surgical intervention. If the changes persist for a longer period of time, or go to the CIN III stage, excision (removal) is necessary. If the result of the examination immediately showed the presence of the stage CIN III, that is, severe dysplasia (also referred to as “carcinoma in situ”), then, as a rule, immediate excision (so-called cone biopsy) is necessary.

Can dysplasia develop into cancer?

When considering the process of cervical cancer, scientists proceed from the model of progression. This means that it develops from precancerous conditions for a period of up to 10 years. That is, there is enough time to diagnose changes hastily, but competently and professionally. If, according to the results of the examination, the CIN III stage is found, then dysplasia should be surgically removed, as in 20-30% of cases it can develop cancer. In most cases, the intervention can be performed on an outpatient basis. Easier degrees of precancerous changes are often cured without treatment, so, in these cases, there is no need for immediate surgery.

In Germany, every woman who has reached the age of 20 years is entitled to an annual gynecological examination as part of an early diagnostics of cancer. Along with other examinations, this includes the so-called Pap test (Papanicolaou test). With the help of a cotton swab or a small brush, a smear of cells from the mucous membrane of the external orifice of uterus and cervix (hence the name a “cytological smear”) is taken and examined under a microscope. Cell evaluation (cytology) provides information about whether there are painful changes in cells and how marked these changes are. Depending on the degree of cell change, classification is performed (from Class 1 to Class 5).The Pap test is painless, uncomplicated and very effective. About 80% of all precancerous stages can be recognized at an early stage by detecting pathological changes in cells. Often, as part of the dysplasia procedure, in addition to cytological testing, a test for HPV is also performed. Human papillomavirus (HPV) and is the cause of dysplasia.

What happens if the examination shows a pathological result?

In the case of detection of pathological features in the reception for dysplasia, colposcopic examination is performed. In such a case, it is an endoscopic examination of the vagina (using a gynecological speculum), in which the cervix and mucous membranes are examined with a magnifying glass (with magnification). The examination is performed on a gynecological chair and is usually painless. After the guidance of the gynecological (vaginal) speculum on the cervix, it is usually applied diluted with vinegar or iodine to see possible changes. Biopsies are taken from suspicious areas, which are then sent to the pathologist for histological examinations.