Examination of the colon

Main > Clinics and Institutes > Gastroenterology > Information > Examination of the colon 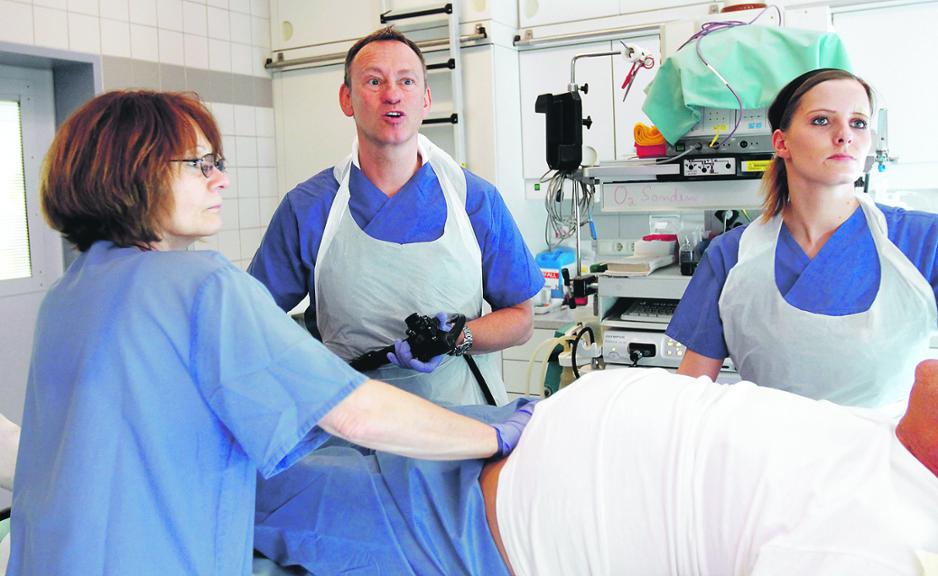 Professional in performing endoscopy Prof. Boris Pfaffenbach and his team are carrying out a colonoscopy (endoscopy of the intestine). The examination is carried out with the help of isolated elastic fiberglass.

Professor, Dr. Boris Pfaffenbach is a gastroenterologist. About 9,000 interventions were carried out under the supervision of the chief doctor of the Clinic.

At noon in the Clinic on the floor U1: Zygmund Seibert is lying on the couch for examinations and perceives the situation a bit with humor: “This is something new, but I have no unpleasant sensations,” he says with a smile. The fact that a mini-tool with covered elastic fiberglass is introduced into the rectum does not bother the 61-year-old patient at all. A mild anesthetic makes it slightly “tipsy”, and the procedure is easier itself.

Seibert accepted the offer of the health insurance fund. He is lying on the couch of the professional in the field of endoscopy Prof., Dr. Boris Pfaffenbach.

Ten minutes later, he is free. The procedure is over and Professor Pfaffenbach is almost certain that there are no signs of intestinal cancer in the patient.

The specialist in gastroenterology is limited to half-measures only in his spare time. “I am willing to run and I love the half marathon,” says a native of Schwelm, who lives with his wife and two sons in Solingen. His daughter is currently on the exchange program for schoolchildren in Canada.

Pfaffenbach likes to go in for sports, except jogging, he runs through the Lohbahtal Valley at least three times a week, and takes a great interest in mountain tourism. He learned to love his second home. Professor Pfaffenbach is fascinated by the cultural life in Solingen and its suburbs. TV often remains off in the evening, Professor is willing to attend concerts or pick up a book (now he reads “Ed King” by David Guterson).

Gastroenterology deals with the diagnostics, treatment and prevention of diseases of the gastrointestinal tract and related organs.

There are two methods of diagnostics, which are carried out in this way (at first glance, the same way), but, purely from the hygienic point of view, have a very significant difference. Diagnostics by one method is carried out through the esophagus, on the other – through the opposite end of the gastrointestinal tract. When performing the so-called “Japanese” in common parlance, specialists receive important diagnostic data that allows prescribing effective treatment. In addition, in medicine, there is a difference between diagnostic and treatment procedures. Therefore, with the help of similar tools and methods, it is possible to carry out examination as well as treatment.

“The gastrointestinal tract is quite amazing, as long as it is healthy,” says Boris Pfaffenbach. In order to imagine its size, a figurative language helps – the intestine has a surface comparable to the area with the stadium, and produces daily several liters of digestive juice.

If there is an impairment in the intestine, his work becomes more complicated. Functions of the esophagus, stomach, intestines, pancreas, liver and gallbladder can be impaired due to many diseases. At the same time, the most frequent symptoms are a disorder of swallowing, abdominal pain, diarrhea, constipation, blood in stool and yellow sickness. Examinations on suspected tumors and cancer diseases, as well as other common diseases of the intestinal tract, require up to 30 high-tech examinations per day at the Clinic of Solingen alone.

To do this, there are five examination rooms that are equipped with modern diagnostic equipment and very sophisticated fiber optic equipment. With their help, the doctor can see on the screen the presence of a tumor in the intestine. On the contrary, there is an examination room and a sterilization room, where in special high-performance washing machines the instruments used in the examinations are cleaned up to absolute sterility.

Before Boris Pfaffenbach meets in an interview with Solingen Tagesblatt (The Daily Newspaper of Solingen), he has already spent several hours at work. “The working day starts always at five minutes at 08.05,” he says, and lists: “At half past eight, the gastroenterological consultation, the morning round in the department, then endoscopies are held before noon.” The schedule is interrupted twice a week by outpatient reception, consultations, activities related to scientific work (congresses), as well as oncological consulates on Wednesdays (a meeting in which colleagues from all departments of the clinic discuss the diagnoses of their cancer patients). For Pfaffenbach, who is equally well versed in diagnosis and treatment, this is an important time. Anyone who can help will inevitably participate in the fight against the disease. Before the results of studies of tissue samples, specifying the diagnosis, can be useful and the experience of the diagnostician. As the professor says, it is necessary to have a subtle flair “at the fingertips”, to have a “medical scent”.